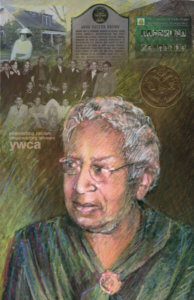 Anna Easter Brown, born on Easter Sunday of 1879, was a spokeswoman for educational literacy, preservation of Black History, women’s rights, and equal rights for African Americans.

In 1909, Ms. Brown graduated from Howard University in Washington, DC, at a time when only a third of one percent of African Americans attended college. In 1908, while attending college, she was one of nine founding members and first treasurer of the first African American sorority in the United States, Alpha Kappa Alpha Sorority, Inc. Sorority membership numbers more than 290,000 worldwide. She was later a charter member of the Chi Omega Chapter of Alpha Kappa Alpha in Rocky Mount and was a charter member of the Rocky Mount YWCA.

Ms. Brown also earned her graduate degree in social studies from Columbia University. She was a North Carolina social studies teacher for more than 50 years, first at Bricks Junior College in Bricks, North Carolina, then Lincoln High School and then at Booker T. Washington High School in Rocky Mount. She was dedicated to advocacy for African Americans and contributed countless hours to actions that would foster their advancement. Ms. Brown annually displayed a black history exhibit and traveled around the country to show it to other communities. In 1951, her exhibition received national attention during its 25th anniversary and featured in “Opportunity,” a magazine published by the National Urban League. Her exhibits helped to expand the discussion of Black History not only at Booker T. Washington but in the Rocky Mount City Schools.

Ms. Brown served as an advisor to young people. She was an avid tennis player and taught the sport to many young people in the area. She was also active in the NAACP, North Carolina Teacher’s Association, American Red Cross, and the Tuberculosis drive. She served faithfully in several ministry positions at Holy Hope Episcopal Church on Ivy Street in Rocky Mount where she was a member for 30 years until her death in 1957.