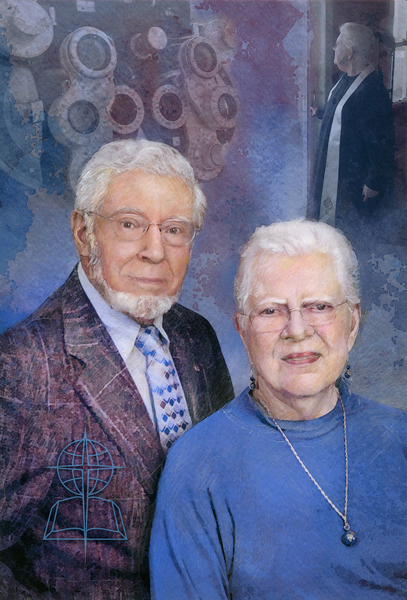 In 1955, Dr. Bob Barbe served in the U.S. Air Force as a flight surgeon. As a young married couple living in Texas at the military base, they became active members of First Baptist Church of Harlingen. This was their first opportunity to encounter people of a different culture that benefited from both medical and spiritual assistance. After completing military service, the family moved to Bristol, Virginia to open a private medical practice. The motivating factor for leaving Bristol after 12 years of general practice was the need for specialized medical education.

Dr. Barbe completed an ophthalmic residency at North Carolina Medical Hospital, Chapel Hill, and McPherson Hospital, Durham, NC. Active as Sunday School instructors and missionary outreach, they were called to missions. During the latter part of Robert’s training in ophthalmology, he answered the request of the Foreign Mission Board, Southern Baptist Convention (SBC) to teach cataract surgery to a mission doctor in Rhodesia, Africa.

Carolyn studied epidemiology at the School of Public Health in Chapel Hill, receiving a Masters of Public Health in 1972 from UNC, NC and attended the Master’s Nursing Practitioner program through ECU, NC and worked as a hospital staff nurse in VA, TX, and NC; as a nursing instructor in VA, and in NC teaching pediatrics, obstetrics and anatomy. She also was a home health supervisor with Edgecombe Co. Health Dept.

Robert was the first ophthalmologist appointed by the Foreign Mission Board, SBC. In 1986, he took the assignment as an ophthalmic surgeon and chief medical officer in the Eye Hospital in Lunsar, Sierra Leone. He learned the local languages and used them to develop rapport for witnessing. Carolyn provided a variety of home health and Christian education services to the region.

In 1995, they retired from full-time medical mission work to resume being active members of First Baptist Church as bible study leaders with WMU, Choir, Outreach ministry, as members of the Tarboro Lions Club, and as a volunteer disaster recovery workers with the NC Baptist Men.

Carolyn received a Master’s Degree in 2006 from the Campbell University School of Arts in Christian Education. From 2006 to the present, Rev. Carolyn Barbe worked as a chaplain at the Mary Frances Center’s alcohol and drug recovery unit until closed and at the Tarboro Vidant Hospital. Carolyn unexpectedly passed away this past May.

Dr. Barbe currently serves as a Preventive Medicine volunteer at the Tarboro Outreach Center, and as a volunteer with the Down East Radio Reading Service Inc. located in Rocky Mount.