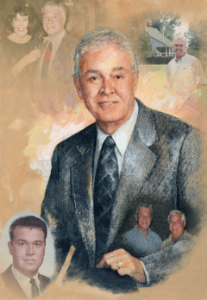 Earl Lynn Roberson was born to Mamie Lee Bunting and John Edwards Roberson in Conetoe in Edgecombe County, June 10, 1935. He was educated in Edgecombe County and Tarboro Public Schools. After earning his Bachelor of Arts Degree in English from Duke University in 1957, Roberson served in the U.S. Army Security Agency as a German interpreter from 1957 to 1960. Roberson received his teaching certificate from Atlantic Christian College in 1961 and his Masters in Teaching and Elementary Education from Butler University in 1965. He received an Elementary Principal’s Certificate from UNC Chapel Hill in 1966. Both a teacher and a school principal, Roberson was considered the consummate educator both in his career and in his personal life. His passion for teaching, researching and sharing knowledge carried through his entire career. From 1972 until his retirement in 1989, Roberson served as Director of Literacy Programs for Edgecombe Community College and coordinated the College’s Visiting Artist Program. In addition to his role as educator, Roberson has restored two of Edgecombe’s most significant historic houses, the 1816 Wilkinson House and the 1790 Braswell House, both of which are often open for tours and educational purposes. He has established significant scholarships for deserving students. Roberson has endowed chairs at Edgecombe Community College, Barton College and East Carolina University. His donations have purchased significant acquisitions at the Blount-Bridgers House. Roberson did extensive research on Baron Edgecombe’s Family History and furnished a small room in the Blount Bridgers with framed portraits, coats-of-arms and documents. He has also been responsible for having historic plaques produced and placed throughout Edgecombe County to identify historic structures and to promote cultural tourism. Roberson was a contributing member of numerous organizations including the National Trust for Historic Preservation, the NC Symphony and Preservation North Carolina. He served on the Boards of Edgecombe Cultural Arts, the Friends of the Edgecombe County Memorial Library, the Furman-Mathewson Trust, and the Bridgers House Foundation. He was also a key member of the Conetoe United Methodist Church.

Inducted into Hall of Fame 2014