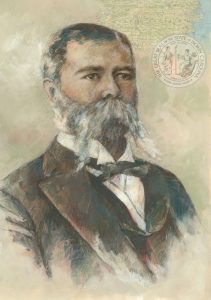 Elias Carr was born in Edgecombe County (ancestral home Bainbridge) in 1839 to Jonas Johnston Carr and Elizabeth Jane Hilliard. Though Mr. Carr attended the University of North Carolina and the University of Virginia, he was later instrumental in creating NC State University. Mr. Carr advocated diverse farming techniques and wrote reports for farm journals on his experiments in farming practice, which led him to form the Farmer’s Institute of Edgecombe County to improve farming in the region. Mr. Carr was the first president of the County Farmer’s Institute, a delegate to the National Farmer’s Congress in 1886, and the first president of the NC Farmer’s Association. In 1892, he was elected Governor of North Carolina. He died in 1900.

Inducted into Hall of Fame 2007
Deceased