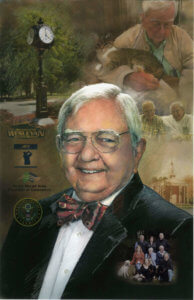 Jim Dickens was born in Roanoke Rapids, NC, in 1929. He was the first in his mill-working family to attend college. He received a BS in Business at his beloved UNC-Chapel Hill in 1954. Before graduating, he served in the US Army from August 1951 to December 1953 attaining the rank of 2nd Lieutenant. He married Alice King Mullis Dickens in 1953 and they had three children and one grandchild. He began his career with National Cash Register Company in 1954. In 1968, he cofounded Printed Paper Products and founded Jim Dickens Business Forms in 1978 (later Jim Dickens Printing and Promotional Products, Inc.)

Mr. Dickens was passionate about education. He served on the UNC Board of Trustees and the UNC Alumni Board of Visitors. A hearty “Go Heels!” was never far from his lips. He served on the NC Wesleyan College Board of Trustees for 18 years and as trustee emeritus. He was chairman of the Bishops Club, the Board of Visitors and a member of the James M. Johnston Fellowship Program. In 2015 he received the Algernon Sydney Sullivan Award from Wesleyan.

Mr. Dickens served over 30 years on the Salvation Army Advisory Board and in leadership positions with the Chamber of Commerce, Merchants Association, United Way Board of Directors, Kiwanis Club, Breakfast Optimist Club, Northgreen Country Club, the local chapter of the American Cancer Society, East Carolina Council Boy Scouts of America, and the Twin County Education Foundation. He was on the boards of First Carolina State Bank, Centura Bank, Triangle East of North Carolina, Jobs for Progress, My Sister’s House, Cities in Schools, Nash Community College Foundation and the Advisory Board of the United Negro College Fund. He helped form the Down East Radio Reading Service. He was proud to bring the ACC golf tournament to Rocky Mount in the 1980s and 1990s. It’s said if there was anything “good” going on, Mr. Dickens was involved.

His heroes ranged from university greats like Bill Friday and Dean Smith to the man collecting cans along the streets to make a living. Mr. Dickens was a humble man, but a hero to many.

Jim died in August 2017, but his legacy lives on as the initiator behind an anticipated first responders’ recognition banquet in 2018.