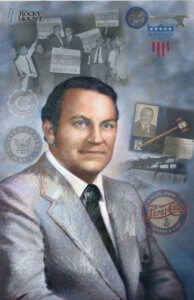 John Thomas Minges was a successful businessman and Mayor of Rocky Mount (1964-1973) who helped transform the area from primarily agricultural to diverse manufacturing. His efforts resulted in Rocky Mount receiving an All-America City Award in 1969.

Mr. Minges was a member of a large and prominent family in Eastern North Carolina that owned the Minges Bottling Company and the Pepsi Cola Plant of Rocky Mount. Upon election, Mayor Minges began an aggressive and successful industrial recruitment campaign. When the large railroad shops of the Atlantic Coastline closed in 1969, the city redoubled its efforts to recruit jobs to the area. Nash and Edgecombe Community College was started during this time to provide training and educational opportunities. It took a team effort of an able city staff, the city council and county commissioners to bring Schlage Lock from San Francisco, Abbott (now Pfizer) from Chicago, Texfi, Burlington Mills, Ilco Unican and Rocky Mount Instruments among others to create a robust economic base. To attract these firms, the city’s limited and aging infrastructure needed to be enlarged. The Tar River Reservoir was constructed, the wastewater treatment plant, the Tar River water plant and the area’s electrical system were all upgraded with funds from local bond issues that Mr. Minges helped to pass.

In 1968, when Martin Luther King Jr. was assassinated, Mr. Minges brought diverse leaders together to hold prayer sessions throughout the community to promote understanding and cooperation. Strongly civic-minded, he was president of the Rocky Mount Chamber of Commerce and a member of several civic organizations, including the Civitan and Rotary clubs. The Minges family was a strong advocate for N. C. Wesleyan College, providing timely funds that later helped build the Minges Auditorium in the Dunn Center. He was a lifelong member of Trinity Evangelical Lutheran Church, a member of the Full Gospel Business Men’s Fellowship International and often volunteered with the FGBF prison ministry at Caledonia Prison.