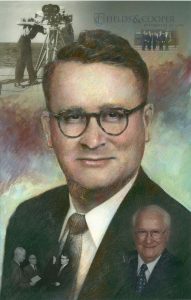 During WW II Milton P. Fields served in the US Navy as a photographer on the USS Saratoga in the Pacific Theatre. After discharge, he earned a degree in English and Social Science from East Carolina University. Milton taught school before attending law school at Emory University and Wake Forest from which he earned his Jurisdiction Doctor degree. In addition to his legal work and humorous writing, Milton has built an impressive record of community service!

Inducted into the Twin County Hall of Fame in 2016