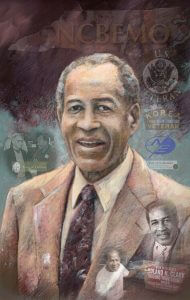 Born in Tarboro in 1930, Roland H. Clark became Valedictorian of the W. A. Patillo High School Class of 1949. A life-long Catholic, he continued his education at the Catholic University of America in Washington, DC until he was drafted by the U.S. Army during the Korean War. While stationed at Ft. Jenkins, SC, and Camp Stewart, Hinesville, GA he was captain of the Boxing Team. He attended the Univ. of Wisconsin Armed Forces Institute, Following his military service, Mr. Clark continued his studies at UNC-Chapel Hill, NC State, ECU, NC Central, the National Tax Training School in New York and the National Center for Community Action in Washington, DC. All of his university studies were concentrated in business and prepared him well for his role as Program Coordinator with N.E.E.D, Inc. working with families and low-income communities. Following his retirement, Mr. Clark became a self-employed Public Accountant. Roland Clark showed an early interest in politics and civil rights advocacy when he was elected President of the Youth NAACP in Tarboro at age 13 (in 1943?). During the 1960’s, he had the honor of marching with Dr. Martin Luther King, Jr. Clark went on to serve on the Tarboro Town Council for 25 years, including eight years as Mayor Pro Tem. He has served on numerous civic and professional boards and received Edgecombe County’s Citizen of the Year Award in 2001.

Inducted into Hall of Fame 2014. Deceased.