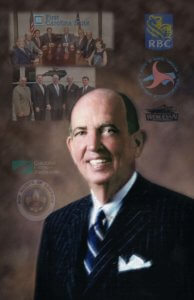 Thomas A. Betts, Jr., was born in Rockingham County in 1941 but has lived in Rocky Mount since childhood. A graduate of East Carolina University, Tom returned to the area determined to make a difference. And, make a difference, he has. Hardly an endeavor or organization in our community has not been helped by Tom’s hard work and conscientious efforts to make Nash and Edgecombe Counties grow and prosper.

A successful businessman, Tom founded Betts & Company, Insurors and later became Senior Development Officer for RBC Centura. He shares his business acumen acquired from 40 plus years in the property and liability insurance fields on the boards of many major organizations. Notably, Tom was a Founding Director of First Carolina Bank and The Rocky Mount City Club. Also, he was a board member of The Planters National Bank Corporation and First Carolina Financial Services

As an early leader in the community, Tom took the lead for Nash Community College to establish an educational training facility to recruit Consolidated Diesel Company. Tom’s commitment and passion for North Carolina Wesleyan College made a direct impact on the sustainability and preservation of the college, earning him the prestigious Algernon Sydney Sullivan Award in 2007. Even the highway beside the college is named the Thomas A. Betts Parkway.

Tom represented the area on the North Carolina Transportation Board from 2003 to 2008, served as chairman of the Carolinas Gateway Partnership for eight years, and currently serves on the board of the Gateway Technology Center which has dedicated its building to his vision to bring educational opportunities to area residents and businesses.

The list continues. But, what sets Tom apart is that he did not stop with his first accomplishment. He continues to work on major projects that seek to make our community better. Tom is the embodiment of the man described by Theodore Roosevelt as the “Man in the Arena” … “who does strive to do the deeds; . . . who at the best knows, in the end, the triumph of high achievement, and who at the worst, if he fails, at least fails while daring greatly, so that his place shall never be with those cold and timid souls who neither know victory nor defeat.”

Mr. Betts and his wife Mary Davis have two daughters, Farrar and Kathryn.