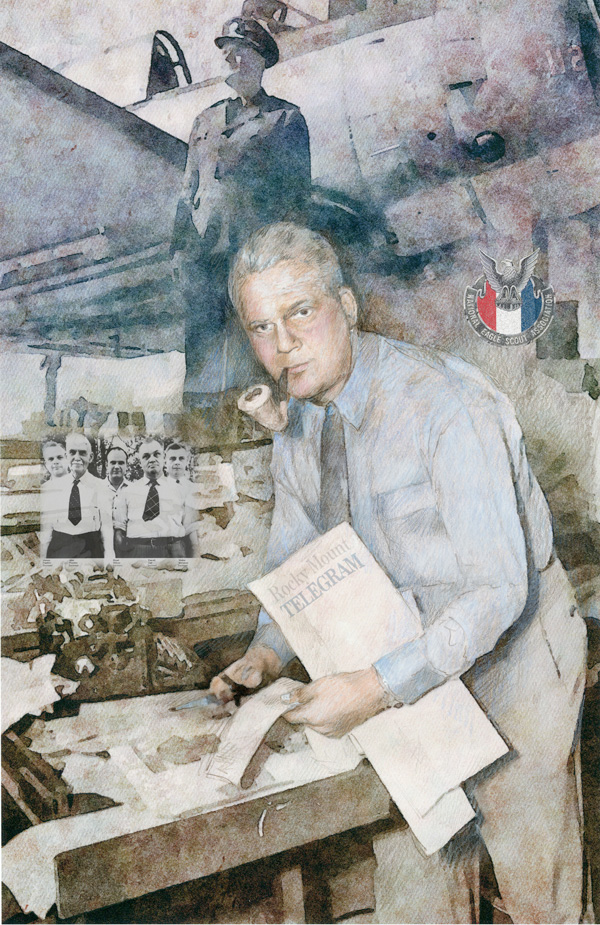 Vernon Sechriest joined the staff of the Rocky Mount Evening Telegram in June 1930 and served as editor until 1985. Sechriest steered the Telegram through a half-century of tremendous change in Rocky Mount. He retired in 1985 but continued writing a weekly column as editor emeritus until his death in 1990. The column was first titled “Main Street,” then later called “Relax.” A collection of his columns was published in book form in 1985, titled “Relax with Vernon Sechriest.” He founded Boy Scout Troop 7 at First Presbyterian Church and served as Scoutmaster for more than 50 years. There he mentored future doctors, lawyers, bankers, editors and other young men through the challenges and rigors of Scouting.

Sechriest was born May 27, 1908 in Davidson County, North Carolina. His parents were John Franklin and Carrie Sechriest. Vernon was one of nine brothers and sisters. His father was a farmer in Davidson County. Mr. Sechriest graduated from Duke University in 1930 with degrees in English and history. He played football at Duke during his freshman year. In his senior year, he was managing editor of the campus newspaper and president of the Duke Glee Club. From 1942 to 1946, he served as public information officer for the U.S. Navy during World War II, first at Jacksonville Naval Air Station in Florida, and later on the Midway. He was promoted to lieutenant commander of Fleet Airwing 1 in the Pacific. Upon returning to the States, he served in the Naval Reserve.