He had a weekly radio show with an audience bigger than the Super Bowl’s.

He received two stars on the Hollywood Walk of Fame. He led the biggest-selling band of the 1940s. And he performed more shows for the troops during World War II than Bob Hope did.

But when Clifton Barnes posted Kay Kyser’s picture on a Rocky Mount Facebook page, some people wrote that they had never heard of the Rocky Mount native — despite the fact that Kyser was able to proudly work “Rocky Mount, North Carolina” into his seven feature films. READ MORE 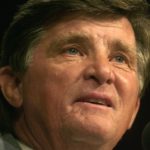